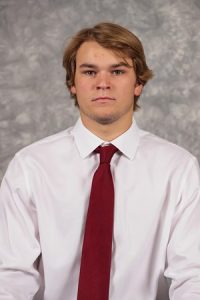 A native of Edina, Minn. • son of Tom and Stacy Nevers • has two siblings (Jackson and Chase) • father briefly played hockey for the Gophers and was drafted by the Pittsburgh Penguins in the 1989 NHL Entry Draft in addition to being selected in the first round of the 1990 MLB Draft by the Houston Astros ahead of a 13-year minor league career • grandfather, Gordie Nevers, was also a minor league baseball player • distant relative of Ernie Nevers, who played professional baseball, football and basketball and is a member of the Pro Football Hall of Fame and the College Football Hall of Fame.