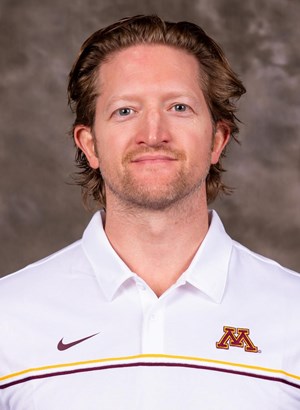 A native of Elk River, Minn., Martin was a three-year letter winner for the Maroon & Gold while recording 97 points (20 goals, 77 assists) in 127 career games at Minnesota. The defenseman, who was an all-conference selection in each of his three seasons of college hockey, helped the Gophers to three-straight NCAA tournament appearances including back-to-back national championships in 2002 and 2003.

Martin, who also won the Broadmoor Trophy with Minnesota in 2003 as WCHA playoff champions, was a Second Team All-American in 2003 while also earning his second-straight Second Team All-WCHA accolade. The defenseman was also named to the WCHA All-Rookie Team in 2001. Martin remains 15th in Gopher Hockey history among defensemen with 97 points while he is 12th among defensemen with 77 assists.

A second round selection (62nd overall) in 2000 NHL Entry Draft, Martin went on to play 14 seasons in the NHL with the New Jersey Devils, the Pittsburgh Penguins and the San Jose Sharks with 870 regular-season appearances and 320 career points (50 goals, 270 assists). Moreover, the defenseman led his teams to the playoff in each of his 14 seasons with 122 Stanley Cup playoff games and 46 playoff points (six goals 40 assists). With the exception of a short AHL stint in his final season on the ice and one season in Switzerland during the 2004-05 NHL lockout, Martin played his entire professional career in the NHL before retiring in 2018.

On the international stage, Martin was named to the U.S. Men’s Olympic Team three times in his career (2006, 2010, 2014). Prior to joining the Gophers, Martin closed out his prep career at Elk River High School as the Mr. Hockey Award winner in 2000 as the top senior high school boy’s hockey player in the state of Minnesota.

Martin earned his bachelor’s degree from the University of Minnesota in 2021 and is currently working toward a master’s degree in youth development and leadership.