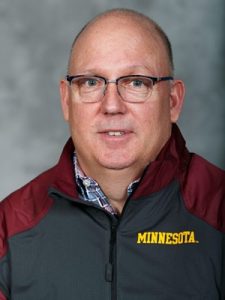 A native of Austin, Minn., Motzko was an assistant coach at Minnesota from 2001 to 2005. During his time in the Twin Cities, the Gophers captured back-to-back national championships in 2002 and 2003. He worked with Hobey Baker Award winner Jordan Leopold, as well as six All-Americans during his first stint at Minnesota. He was also on the bench as Minnesota claimed back-to-back WCHA tournament championships in 2003 and 2004.

Following his four years with the Gophers, Motzko spent 13 seasons building St. Cloud State into a championship program. The Huskies advanced to the NCAA tournament eight times under his leadership, including a run to the Frozen Four in 2013. While in St. Cloud, Motzko helped develop Hobey Baker Award winner Drew LeBlanc, along with eight All-Americans.

He previously coached collegiate hockey at Miami (OH) and Denver, helping Miami win the CCHA title as associate head coach in 1993. He graduated from St. Cloud State in 1987 as a two-time men’s hockey letter winner. He also served as an assistant under Herb Brooks at his alma mater for one season.

During his college head coaching career, Motzko has been recognized as a conference coach of the year five times, most recently in 2020 by the Big Ten. He previously won the award twice in the WCHA (2006, 2007) and twice again in the NCHC (2014, 2018).

Motzko has twice led teams in the United States Hockey League (USHL) as head coach and general manager. He spent four years with the North Iowa Huskies, leading his 1989 team to the Junior A national championship. He was named the league’s coach of the year of that season. He also led the Sioux Falls Stampede for the team’s first two seasons of existence, and was named the league’s GM of the Year in 2000 for his work there.

Contract runs through the 2025-26 season